FLIRTING WITH FATE BY PREETI SINGH 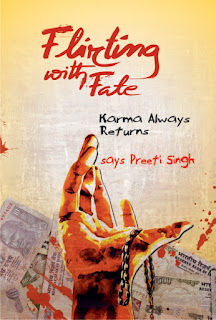 FOR THOSE who are tired of the novels that focus on cheesy relationships or the classics, preeti singh’s debut novel is a welcome change.It is a book that has something of both…it has soul and substance and delves into the human psychology bringing to surface the pain and agony of a person who crosses every limit to gain love and acceptance. Her novel takes the reader on a roller coaster
ride with her words that flow rather “ naturally”. She succeeds in creating the perfect imagery in front of the readers ,as one turns the pages of the book he is effortlessly carried from one chapter to another. The author’s treatment of the subject of epilepsy is also very sensitive and she has put the naked truth of the callousness of the people when they discover someone has it and their misconceptions about the disease. . A great book is not only that which entertains us but also gives us some message,just like PAULO DOES..here we have the powerful message of KARMA conveyed subtly in the book I Karma in Indian religion is the concept of action or deed which causes the cycle of cause and effect. God does not make one suffer for no reason it is simply an extended expression or consequence of natural acts. In a layman’s words YOU REAP WHAT YOU SOW .
The story is set in the beautiful valley of shimla. ANAND , the protagonist of the story is a boy who is abandoned by his parents and is left at the doorsteps of palash –an orphanage run by a samaritan called mr GONSALVES.He is assisted by SRIBEHEN ,the housekeeper who has a secret crush on him. To serve as the icing on the cake is the humourous character of Fluffy. The dog at palash who is a know all and smells everything that anand is upto. For a dog lover like me it was a delight to read some part of the story from a dog’s perspective.preeti singh lucky owner of the wonderful amber subtly brings out the helplessness of a dog’s inability to express his emotions and warn its master from impending danger.

AS a kid anand’s heart pained at his being poor…….the lustre of the luxurious cars hurt his eyes, he desperately wanted to be among the elite kids he yearned for that kind of lifestyle and riches…
Anand acts like one demi god and wants everybody to behave according to his whims and fancies. He firmly believes that he has the power to give punishment to anyone who wrongs him or is potential threat to anyone he loves. He manages to uproot anyone and anything that comes in the way of his happiness.
There is a mention of a box called “seeds” in which he keeps some remembrant of the evil deeds he does—its creepy just like any typical psycho killer. There are many victims of his disastrous wrath whom he kills for his crush, for his sister, for his own self ego .Due to his evil tactics and drive for money and power he becomes a local goon , manages a comfortable ,rather affluent life in delhi. Having illicit relationships with his landlady, as well as the wife of his business partner. He has it all…the women…money..power..lust ..passion and has got away with all his crimes…murders,…rapes n deceit. But he does return home to Shimla, thinking hes conquered the world….to be with his true love.
SO IS THIS THE HAPPY ENDING LIKE MOST OF OUR MELODRAMATIC MOVIES OR PREETI SINGH GIVES US AN ENDING THAT SENDS A CHILL DOWN OUR SPINE. TO FIND OUT GRAB YOUR OWN COPY OF “ FLIRTING WITH FATE “